A Brief History of Legal Aid BC

On October 1, 1979, the Legal Services Society (LSS) began operations as the provider of legal aid in British Columbia. Our goal then, as it is now, was to help people experiencing barriers to legal help. Those who do not have the financial resources — and sometimes the educational, social or health resources — to effectively access the justice system when their families, freedom, or safety are at risk.

The new head office was at 555 West Hastings Street, Vancouver, but the society also had offices around BC ready to serve clients, which it inherited from its two founding organizations.

LSS was, in fact, a merger of the Legal Services Commission and the Legal Aid Society. The two sides had "diametrically opposing points of view" about how to plan a province-wide legal service, but the desire to help disadvantaged British Columbians smoothed over those early conflicts.

The Legal Services Society Act, enacted on July 30, 1979, was much different than the current legislation. The original Act stated that LSS was to ensure that the services ordinarily provided by a lawyer must be available to poor and otherwise disadvantaged people. Under that Act, LSS was routinely sued when people were refused services. The mandate was broader than the budget and, eventually, the mandate got a little smaller. 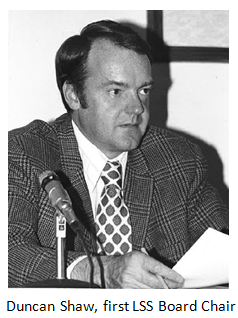 In 1979, the LSS board had 14 directors, which proved unwieldy; we currently have 9 members. Five appointed by the Lieutenant-Governor in Council, as recommended by the Attorney General of BC; and four by the Law Society of BC.

In the early years, people were financially eligible for legal aid if paying for a lawyer would impair their ability to feed, clothe, and house themselves or their family. We covered criminal and family matters, as well as things like help to resist foreclosure proceedings against the family home, or to appeal a Workers' Compensation Board (WorkSafeBC) decision.

Today, our financial guidelines are based on the poverty level. People can get a lawyer for serious family problems, child protection matters, criminal issues and some immigration, mental health, and prison law issues — but no longer for poverty law matters.

Fiscal problems were common for LSS throughout much of the 1980s, as government funding was routinely increased and then reduced. But 2002 was probably our most difficult year. The government announced severe budget cuts, and fired the LSS board of directors. Offices throughout the province were closed, many staff were laid off, and a new model of delivering services was born. There was another serious setback in 2009, when funding issues meant more offices were closed, and staff and services cut.

In 2018, we received a bigger increase in provincial government funding than we'd seen in years. We expanded legal aid services so we could help more people facing family and criminal law problems, and opened Parents Legal Centres in nine (now ten) locations to help families at risk of their children being removed, or whose children had been removed by social workers as result of concerns for their safety. Knowing of the poor outcomes for many children who go into care, and understanding that many families who are considered neglectful are often simply poor, the centres were designed to provide not only legal help but advocacy, support with related matters, and connections to community services.

In early 2020, the Legal Services Society was rebranded as Legal Aid BC — the name many people were already using to describe us.