Describes the approach taken by the Legal Aid BC Gladue Program up until March 31, 2021, when Legal Aid BC ceased to operate its program and provincial responsibility for Gladue reports shifted to the First Nations Justice Council.

Provides a set of guidelines to support Gladue report writers in preparing reports to submit at bail and sentencing hearings for Indigenous people. Guidelines describe:

Also includes a checklist for submitting Gladue reports for legal review, a glossary, an extensive bibliography, Gladue report templates, a guide to citation styles, and an orientation guide for Gladue report writers.

This publication is for people who are familiar with legal concepts.

Read this publication in...

Order from Crown Publications in... 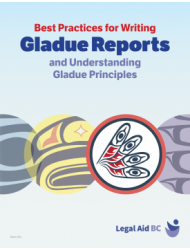 Back to previous   Publications home